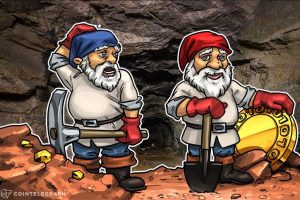 Investors are dumping gold in favor of Bitcoin, according to analysts in a recent interview on CNBC. One of them, Phillip Streible of RJO Futures stated boldly that “Bitcoin has stolen a large market share of gold.”

To explain how they are tracking this shift, Larry McDonald of The Bear Traps Report, stated that generally when bond rates go down, gold goes up. However, in recent weeks, the yields on bonds have decreased, and gold has simultaneously dropped by two percent – an event that is

Analysts think the change is the result of increasing investments in Bitcoin, among other cryptocurrencies. According to McDonald:

“Over the last two years, every time rates have come down, and this week rates have moved lower, you had gold go up. Almost every time, there has been an 82 percent correlation between gold and bonds. This week, for the first time, that correlation broke down, and I do think it has something to do with Bitcoin.”

While the price of gold has been traditionally stable, the recent declines show the investment pool has begun moving into cryptocurrencies. In fact, according to McDonald, the total market cap of all cryptocurrencies as a fraction of liquid tradeable gold is already up two or three percent from last year, stating “cryptocurrencies are definitely eating into the gold play.”

For those of you still procrastinating, what the heck are you waiting for? It’s less than $255 for a lifetime membership…