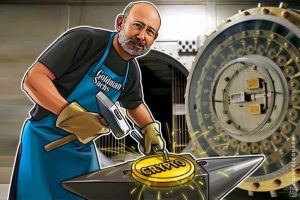 According to Bloomberg, Goldman Sachs will be clearing Bitcoin futures contracts for at least some clients when futures markets go live on December 10 (CBOE) and December 18 (CME). This is major news, since the soon-to-be-released futures markets are of little use without banks and brokerage firms actually using the platforms to trade.

Bloomberg cited an unnamed source “with knowledge of the firm’s plans,” saying that Goldman Sachs will be offering client trades on a case-by-case basis. Tiffany Galvin, spokeswoman for Goldman, wrote:

“Given that this is a new product, as expected we are evaluating the specifications and risk attributes for the bitcoin futures contracts as part of our standard due diligence process.”

Goldman CEO Lloyd Blankfein is reportedly cautious, but open to the idea of Bitcoin, unlike many of his banking counterparts such as Jamie Dimon. Blankfein has written:

“I read a lot of history, and I know that once upon a time, a coin was worth $5 if it had $5 worth of gold in it. Now we have paper that is just backed by fiat…Maybe in the new world, something gets backed by consensus.”

Goldman Sachs is considered one of the most elite investment banks in the world, attracting the best finance experts and the wealthiest clients. The firm is also known for its “revolving door” – wherein Goldman executives move back and forth from the bank to government service and back again. In fact, the process is so entrenched that the bank is sometimes referred to as “Government Sachs.”

Learn How to Become Your Own Bank

For those of you still procrastinating, what the heck are you waiting for? It’s less than $255 for a lifetime membership…