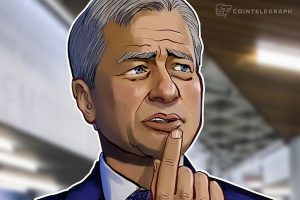 Given the strong views of JP Morgan CEO Jamie Dimon on Bitcoin, it is ironic that a global markets strategist at JP Morgan has come out with a note saying that regulated futures could give legitimacy to Bitcoin

The decision of US regulators to allow Bitcoin futures to trade on the Chicago Mercantile Exchange (CME) has pushed Bitcoin into mainstream finance. CME obtained the regulators’ go-ahead after self certification, having assured the US CFTC that the products will follow existing law. The move could allow financial institutions with restrictive mandates to take Bitcoin exposure.

Nikolaos Panigirtzoglou, a global markets strategist at JP Morgan, also feels that the move could give legitimacy to Bitcoin. In a note to investors, he said:

CEO Jamie Dimon has strong views about Bitcoin: he believes the currency is a fraud and has even threatened to fire anybody who is “stupid enough” to buy it. He has ranted that governments will shut Bitcoin down and that the currency is in a bubble which will wreck investors.

Dimon is not alone in his views – other industry titans like Warren Buffett have said that Bitcoin is best avoided. However, that hasn’t stopped the currency’s price from climbing to new levels.

Panigirtzoglou seems to have taken a view diametrically opposite to that of his boss, calling Bitcoin a new asset class:

The value of this new asset class is a function of the breadth of its acceptance as a store of wealth and as a means of payment and simply judging by other stores of wealth such as gold, cryptocurrencies have the potential to grow further from here.

In spite of Jamie Dimon’s views against Bitcoin, JP Morgan seems to be making the most of the opportunity presented by the currency’s rise. The bank recently invited Bart Stephens, a tech venture capitalist, to give a talk on Bitcoin at JP Morgan San Francisco. Stephens presented to fund managers and clients, even as Dimon slammed Bitcoin.

The comments made by Jamie Dimon against Bitcoin resulted in a dip in its price, which coincided with JP Morgan buying units of a Bitcoin tracker fund. This has resulted in a market manipulation case against Jamie Dimon in a Swedish court. After CME announced the launch of Bitcoin futures, JP Morgan surprised observers by announcing that it may add Bitcoin futures to its own list of offerings. When opportunities for money making exist, there are no untouchables for the big banks.

Will you get left behind?

For those of you still procrastinating, what the heck are you waiting for? It’s less than $165 for a lifetime membership… Take Action Now!