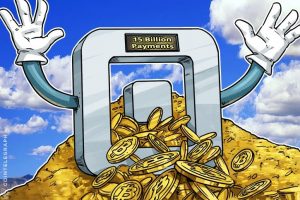 Jack Dorsey, the CEO at Twitter and Square, particularly expressed his enthusiasm towards the potential of Bitcoin as a robust store of value, and the Square team’s optimism surrounding the long-term growth trend of Bitcoin.

In an interview with Forbes, a Square representative explained:

“We’re always listening to our customers and we’ve found that they are interested in using the Cash App to buy Bitcoin. We’re exploring how Square can make this experience faster and easier, and have rolled out this feature to a small number of Cash App customers. We believe cryptocurrency can greatly impact the ability of individuals to participate in the global financial system and we’re excited to learn more here.”

Market cap of Square surges by $1 bln after Bitcoin integration

Since Friday, the share price and the market cap of Square have increased by nearly 10 percent, as the company’s market cap rose from $15 bln to $16 bln within a five day period.

Various reports since September have revealed that Bitcoin has become a trendy and in-demand keyword within most major industries. Even large-scale multi-billion dollar companies such as Square and Overstock have started to experience major surges in their market valuations following their integration of Bitcoin and Blockchain technology.

More importantly, the integration of Bitcoin allows major payments app like Square to compete with existing service providers within the cryptocurrency and Bitcoin markets, which are dominated by a handful of companies including Coinbase and Blockchain. Given that Coinbase has evolved into a $1.6 bln startup within the past 12 months, companies in the traditional finance sector have begun to consider integrating Bitcoin and offering infrastructure around the cryptocurrency.

What comes next with Square?

In consideration of the company’s optimism in regards to the long-term growth and adoption rate of Bitcoin and its CEO Jack Dorsey’s enthusiasm towards the cryptocurrency market, it is highly likely that the development team behind Square will actively investigate the possibility of full Bitcoin integration throughout its platform.

For many years, Square has operated a widely utilized Point of Sale (PoS) network that has been used by hundreds of thousands of merchants globally. The integration of Bitcoin into the Square PoS network would immediately enable anyone to use Bitcoin at Square-using merchants such as restaurants, cafes and stores.

Whether Square intends to pursue the integration of Bitcoin into its PoS system remains unclear. But, major PoS operators in major regions like Japan have already started the process of integrating Bitcoin. Most notably, Recruit Lifestyle’s AirRegi PoS app, which supports more than 200,000 merchants in Japan, has rolled out Bitcoin integration and is expected to provide extensive support to over 20,000 merchants by the end of this year.

Don’t be a Square… Join the Club (pun intended)

Take a look for yourself, free for 7 days.