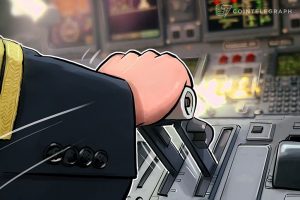 Bitcoin price has risen by 17 percent within the past 24 hours, after dipping below $5,560 earlier today. Since then, Bitcoin price has stabilized at $6,450, recording a daily increase of around $890.

Triggered by the sell-off of major Bitcoin investors and the rapid surge in the value of Bitcoin Cash Bitcoin price plunged over the past weekend. However, as expected, Bitcoin price recovered relatively quickly as the Bitcoin Cash price declined from over $2,800 to $1,200.

The sell-off of large sums of Bitcoin in the past few days led to a domino effect, wherein traders started to panic selling their Bitcoin in fear of market uncertainty and a major Bitcoin price correction. Consequently, the daily trading volume of both Bitcoin and Bitcoin Cash surpassed the $10 bln mark, for the first time in history.

However, as Bitcoin has demonstrated several times in the past year, it has recovered significantly faster than most analysts had expected in the short-term to around $6,500.

A similar trend will likely occur in the upcoming weeks with the US market. The second largest Bitcoin market behind Japan is highly optimistic in regards to the entrance of institutional and retail investors into the Bitcoin market, alongside tens of billions of dollars in new funds.

CME Group and CBOE, two of the largest options exchange domestically and globally, will launch Bitcoin futures exchanges by the end of 2017, to provide an infrastructure and sufficient liquidity to institutional investors.

Previously, Mike Novogratz, the billionaire hedge fund legend, revealed that a herd of institutional investors are preparing to engage in Bitcoin trading. Such movement will be made possible with the launch of large-scale Bitcoin futures exchanges approved by the US Commodities and Futures Trading Commission (CFTC).

Billions of money on the sidelines to come to Bitcoin

Through strictly regulated Bitcoin futures exchanges, the so-called “money on the sidelines” invested in offshore banking accounts, wealth management products (WMPs) and traditional assets will migrate to Bitcoin in the mid-term. As Novogratz explained:

“I can hear the herd coming. I was just in San Francisco, met with a few big institutional investors and their still a ways away but they’re coming. Lots of funds are being raised and so I’m pretty confident to say that it [Bitcoin price] is going higher.”

Such movement will allow Bitcoin price to achieve new highs before the end of 2017 and potentially gear towards the $10,000 mid-term price target of highly regarded financial analyst Max Keiser.

The Time is Now

Don’t miss the biggest opportunity of your lifetime?

Find out how…. free for 7 days. Take a look for yourself, then decide if you’d like to become a paid member.

Join Now!, It’s the easiest way to get involved in the fastest growing financial opportunity of your lifetime!

Only .015 BTC you’ll become a lifetime member of the club (you never pay another dollar from your pocket).

This is your chance! to get onboard with the elite group of bitcoin millionaires. <Join Now>

One Reply to “Bitcoin Up 17%, Will it Achieve a New All-Time High in Short-Term?”